The latest movie in the Rocky series, Creed II, has just been released in the UK and the reviews are good.

Pretty impressive considering this is the 8th in the franchise. But then again, these are not just any movies…. these are Rocky movies!

We’ve found out so many interesting facts about the Rocky movies that we only have space to post about the original. Rocky was written by Sylvester Stallone in 1976 (he wrote the first draft in three days) who sold it for the huge sum of $350,000. Stallone had $106 in the bank at the time.

The film studio, United Artists, wanted an established star like Robert Redford or Burt Reynolds for the lead. Stallone had other ideas and had insisted on getting the role when he sold the rights. As a result, the studio cut the budget from two to one million dollars which meant that many scenes had to shot in one-take, including the iconic fight scene.

Other scenes had to be hastily re-thought. For example, the ice-rink scene was to have 300 extras, but the production couldn’t afford them so in the end there was only one. Stallone had to throw it together how it appeared in the movie – and ironically is one of the most successful scenes in all of the Rocky and Creed movies. The movie was shot in 28 days, won three Oscars including Best Film, and has grossed over $225,000,000 to date! 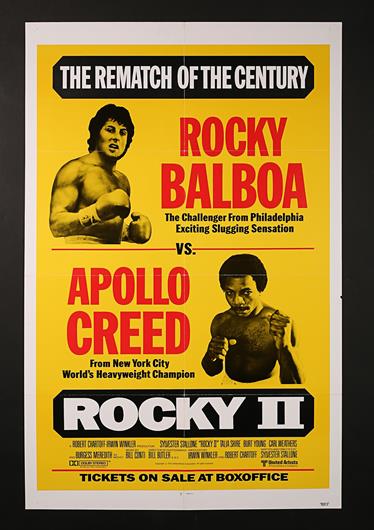 The Creed II poster features leading man, Michael B. Jordan who plays son of Apollo Creed, and would shame any self-respecting man to get down the gym some more. VMA haven’t got our hands on the Creed II poster yet but we have the most stylish black and white poster from the original Rocky 1976 movie, and the ‘re-match’ poster from Rocky II in 1979 which was designed to look like a genuine boxing promotional poster.